The Birds of Patoka Lake 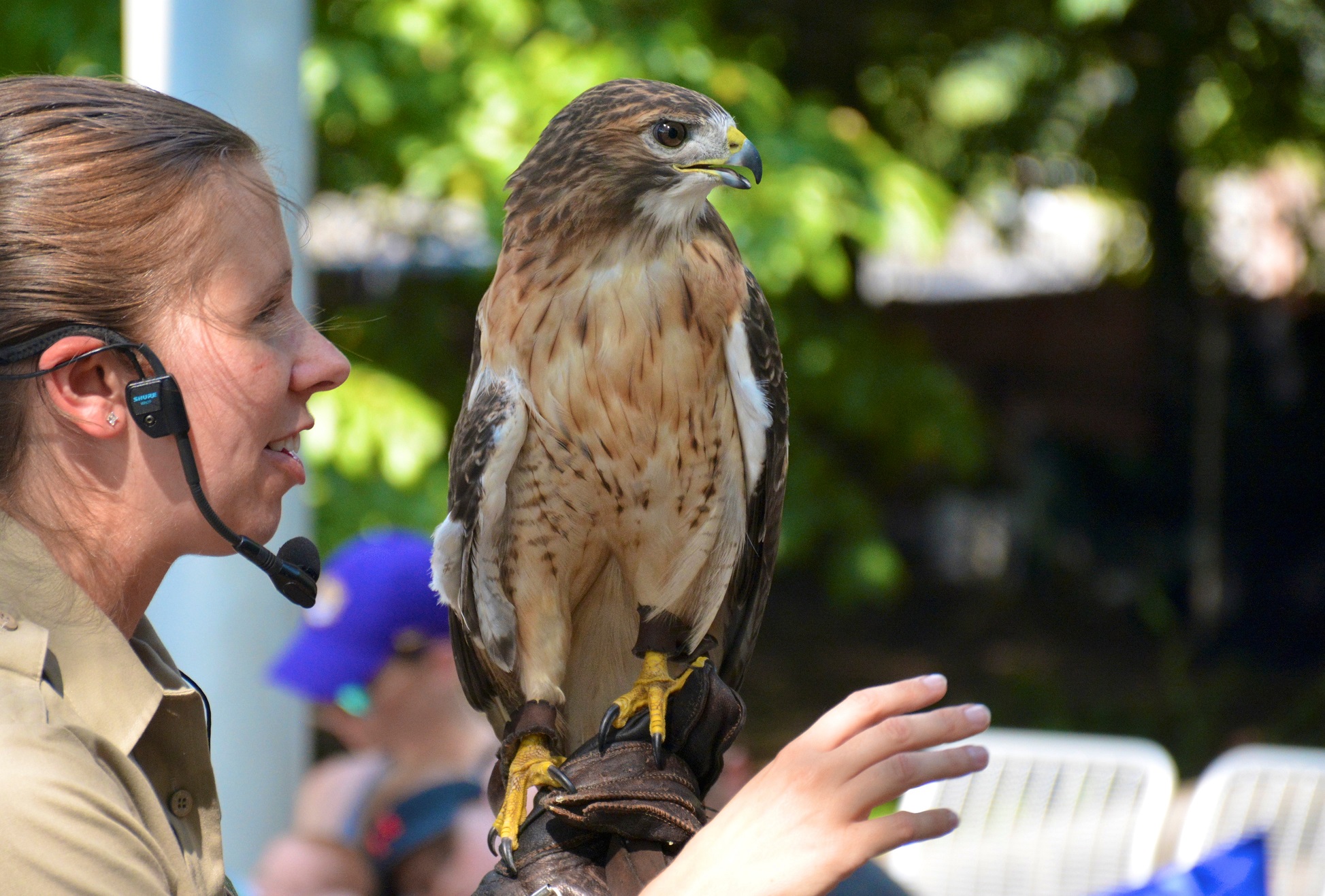 Patoka Lake Nature Center has been home to birds of prey since January 1989. Many have traveled throughout Indiana serving as educational ambassadors to educate the public about their ways of life. Let’s take a look into their lives from wild to captive birds.

Our oldest ambassador is an Eastern Screech Owl who turned 8 years old in April. One evening in August of 2011, he was flying around the most perfect place to catch a meal – a roadway. Instead of finding lunch, he found the broadside of a live-haul chicken semi-truck. The poor guy ended up in the crate with the chickens and was delivered to the chicken plant in Corydon. Upon discovering the owl, the truck’s driver called Hardy Lake Interpreter & Rehabilitation Manager Leslie Grow. Leslie drove to the plant to inspect him and found that he had a broken elbow in his right wing. He had also suffered head trauma and would not bear weight on his left leg. While transporting him back to her facility, Grow’s vehicle was hit by another semi-truck. Thankfully, there were no injuries to driver or owl. The owl was secured in a transport carrier to keep him safe.

After caring for his injuries from the first incident, the head trauma and sore leg healed, however the elbow in his right wing proved irreparable. He would live the rest of his life in captivity. We were looking to house an owl at Patoka Lake after our ambassador barred owl passed away in 2009, at over 20 years of age. We were waiting for just the right owl and had never housed an eastern screech. This Eastern Screech Owl has been a perfect fit for our educational programming. He is a small bird with a rather large personality. He is thriving on a diet of mice and chicks. The next bird to join our team was the ever-impressive bald eagle. She was living in Alaska along the Kenai River when at five weeks of age in June 2013, the nest came crashing to the ground. Her parents and a sibling were uninjured, however, her right wing was badly injured in numerous locations. Luckily for her, local fishermen found the nest on the ground the morning after it collapsed and called the local wildlife biologist to escort her to a rehab facility. She was transferred to southern California for additional rehab, and to become a flighted educational ambassador. When the facility’s educational team realized the eagle would not fly due to the severity of the breaks in her wing, they transferred her to Patoka Lake.

She joined our educational team in December 2013 after a long flight from Los Angeles to Indianapolis. She left a warm and rainy 600F area and arrived a few hours later to our balmy 00F temperatures with snowfall. You may have heard the expression “it was so cold my knees were knocking.” Well on this particular day, it was so cold her feathers were knocking together as she shivered. Shivering is a natural process that birds of prey do to stay warm just like us. Once she got acclimated, we spent countless hours working with her in training to prepare her for programs. She turned 6 years old the week before Memorial Day this year. She went from an all dark bird with dark head and splotchy white and brown tail feathers to a beautiful example of our nation’s symbol. She is the star of the show because she demands attention when I am working with the other two birds during programs. She will jump to the ground, call and walk over to look in my direction while other birds are on the glove. As soon as she sees it is her turn, she jumps back onto her perch system and waits for me by the door to get on the glove. Her favorite food is squirrel with a close second being rabbit. She does like fish but on days we provide a squirrel she gets really excited, and her entire demeanor changes. You can see the thrill in her expression as she comes quickly across the shelter to jump onto the tree stump where her squirrel is being served. The final member to join our educational team was the Red-Tailed Hawk. He was found in a farm field, unable to fly. The farmer called Hardy Lake’s Dwight R. Chamberlain Raptor Center, and Leslie Grow picked him up. She found that he had been shot approximately 10 days prior. He had a few beads from the shotgun shell in his body but the one that caused the damage tore through both bones in his lower forearm.

I went to Hardy Lake to look at him in June 2016. Our last hawk passed away nearly two years prior. When I got to Hardy Lake, I noticed he was such a proper bird already with very little training done by the raptor center staff. He stepped right onto my gloved hand and when bating he would immediately right himself to stand again with no assistance. I took him back to the Nature Center the day we met. During the summer of 2016 molt, his tail feathers turned from brown and white stripes to those beautiful feathers that give him his name. This told us that he was between his second and third year of life. The shedding of those feathers is a way of symbolizing a mature bird who could be mating and raising young of their own in the wild. He has been a fine bird to work with, and he, too, has a personality all his own. He is a jumpy bird and rarely stands completely still. He is constantly shifting his feet on the glove. To this day, when he bates, he will immediately right himself to standing without assistance. He eats everything we give him almost on a daily basis. We joke that he acts as though it is his last meal. He has always been a healthy eater but out of all his wild food options will not touch a snake when we provide those as food.

Each of these birds is truly unique and unlike the birds that have previously been in our care. They are a joy to work with, and I am honored to hold them so close to me each day. My favorite part of working with these extraordinary creatures is watching the faces of our visitors light up when we share their unique stories and species traits. We are currently raising funds to build the birds of Patoka Lake a new raptor shelter – one that is safe, clean, and will serve as an attraction for community members and schools for years to come. Click on the Get Involved page to learn how you can contribute.